W.L.Wyllie was an artist in oil, watercolour, etching and aquatint of marine and tidal Thames subjects. W.L.Wyllie was born in London on 5th July 1851, son of William Morison Wyllie and brother of Charles Wyllie. W.L.Wyllie studied art at the Heatherleys in 1865, and at the Royal Academy Schools between 1866-69, winning the Turner Medal 1869. W.L.Wyllie was the father of Harold Wyllie. W.L.Wyllie lived in Portsmouth for many years from 1907 and died in London on 6th April 1931. Acknowledged as one of the leading marine artists at the turn of the century. Marine painter to the Royal Victoria Yacht Club, Ryde. Work in the National Maritime Museum. 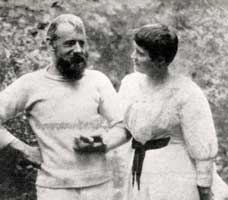 Both his father and his half-brother, Lionel Smythe, were painters, so it was only natural that the boy should take to art at an early age. All the family drew and painted as a matter of course.

W.L.Wyllie first studied at the Heatherly’s in Newman Street, London, where he spent most of his time making drawings from antiques. Later W.L.Wyllie entered the Royal Academy School, where he studied under Leighton, Millais, Armytage, Wells, Landseer, and many other painters of Victorian times. 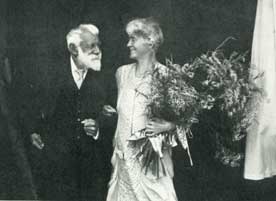 W.L.Wyllie won the Turner Gold Medal, and he was taught perspective in a very thorough manner by Bowler.

W.L.Wyllie’s Family had a house on the shore at Wimereux, in France, and it was usual to spend about half the year at the seaside and the other half in London.; so that a great part of the time was spent in making sketches of the sea and sky, in storm or sunshine, gulls, fishing boats, and square-rigged vessels of all sorts, many of the latter drawn with the aid of a telescope. All ships avoided the rocks and shoals when they could. Wrecks, however, were frequent, and whenever a helpless coaster came crashing on the rocks she made a good subject for the future marine painter, and many are the books filled with interesting sketches – some of them depicting sad events.

Other books contain drawings made whilst on the journey to and from London Bridge and Boulogne, in the old paddle-wheel steamer Pantber. The subjects are too numerous to mention in this short notice, but all are of what passed daily on river and sea and helped to perfect the knowledge and ability of the R.A. to be. (© 2020 Robert Perera Fine Art) 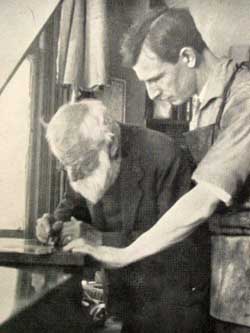 W.L.Wyllie exhibited his first picture when the R.A. Exhibition was held in Trafalgar Square. It was accepted but skied, being the topmost picture in the lecture room. Next year W.L.Wyllie had better luck with a picture of a sailing ship towing down the Thames. It was hung just over the line. This was the first exhibition in the Burlington House Gallery.

Afterwards a view of London from the top of the Monument was hung on the line itself, and as time went on he became better known – making drawings for the Graphic and illustrating books for Cassell’s ; the first appearing in 1870, “German prizes being brought into Boulogne.”

In 1871 the Wyllie brothers walked to Limehouse, where they bought an old ship’s longboat for £11. A cabin was built in the for-part and mast and sails were added, with slag from Erith Iron Works for ballast.

The Moonlight was not an ideal craft, but she made many long cruses, sailing along the French coast to the mouth of the Seine and then up-stream to Paris.

Another cruise was made in 1873 along inside the Flemish Banks to Ostende, up the canals to Bruges and to Antwerp, and thence through the waterways to Dordrecht and Rotterdam.

Hundreds of pictures and studies were made on these expeditions, and though the brothers were not very expert coasters at the beginning, they soon became so.

A picture painted at this time of a foundered brigantine with a great flock of seagulls, was bought by the celebrated painter, John Sargent. “The Goodwins” and “Blessing the Sea” appeared in 1873, and “The Silent Highway” the year After. This in its turn was followed by “Coming up on the Flood.” In 1881 “The Rochester River” was bought by J.C. Hook, R.A. and “Our River” and “The Port of London” came next.

In 1883 the Council of the Royal Academy bought “Toil, Glitter, Grime and Wealth on a Flowing Tide” for the nation under the terms of the Cantry bequest.

The late Robert Dunthorne, the publisher, was so much taken with this picture he gave W.L.Wyllie a commission for a large etching. W.L.Wyllie then set to work to learn the technique of this branch of the arts.

“Work-a-day England” appeared in 1886, and “The River of Gold” the following year. An etching of this subject was a great success, and the same may be said of the “Highway of nations.”

W.L.Wyllie was elected Associate of the Academy in 1889, and exhibited “Davy Jones’ Locker” and “The Phantom Ship.”

The etching of “Kit’s Hole Reach” and “The Calliope steaming out of Samoa in the teeth of a hurricane” were published in 1892, and “The Roaring Forties” in 1894. “London’s Water Gate” was painted for Sir John Wolf Barry, the engineer of the Tower Bridge, in 1895.

The etching, “A Southerly Gale, Brighton,” showing the old chain pier in the midst of breakers, was published just before the pier’s destruction.

In 1899 a second picture was bought for the Chantry collection, “The Battle of the Nile.” Sargent was serving on the Council of the Academy and it was partly owing to his appreciation of the work that it was selected. (© 2003 Robert Perera Fine Art)

In 1901 “The Passing of a Great Queen” was bought for the Walker Art Gallery, Liverpool. The Art Union of London published the etching of “The Battle of Trafalgar” in 1905, and in 1907 Mr. Wyllie became an Academician, sending “The Wind Falls Light” as his diploma work. His first drypoint was exhibited at the Royal Society of Painter Etchers about this time; it was little more than a sketch, just river craft becalmed. The sky and water represented by white paper with only a suggestion of ripple.

Ever since that date drypoints have become more and more finished. Year by year W.L.Wyllie has found out what scratches on bright copper could be made to produce, and after many failures the work became more easy.

Only in recent years was it discovered that the real finishing touches are best done after the plate has been steel-faced, and this very simple procedure enables the artist to put a delicacy and finish into complicated subjects which would have been quite impossible in the earlier days.

Aquatint and drypoint have been used on some plates, resulting in quite novel effects.

During the Great War, Mr. Balfour, the First Lord of the Admiralty, gave permission for Mr. Wyllie to cruise in His Majesty’s ships, and in the North Sea, Harwich, Rosyth, Cromarty, and Scapa Flow, he made hundreds of studies of the doings of our Navy. He saw the German Fleet surrender in the Forth and went with the last convoy of battleships to Scapa Flow. A number of etchings and drypoints resulted from all these cruises. W.L.Wyllie has flown in the air, cruised, submerged in a submarine, and even taken a trip in a Q-ship. His book “Seafights of the Great War” gives some of his experiences.

In 1926 the United Service Club asked Mr. Wyllie to paint an enormous picture of the Battle of Jutland, and this has been exhibited at the Royal Academy and at the Walker Gallery, Liverpool. An etching of the subject has been issued privately to the members of the club.

From a sketching expedition to Northumberland and the East Coast of Scotland, two series of drypoints were published-for private circulation only. These were fully subscribed for, are now out of print and the plates destroyed, as also the “Pass of Glencoe,” which was exhibited at the Royal Academy, 1928, Catalogue number 1194.

W.L.Wyllie next tour was the Mediterranean, from which the famous aquatint “The Parthenon” resulted. 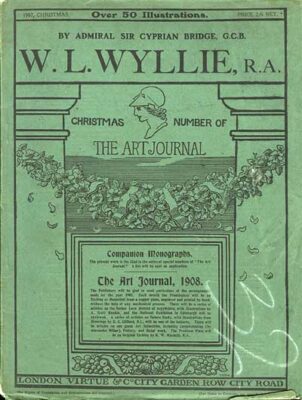 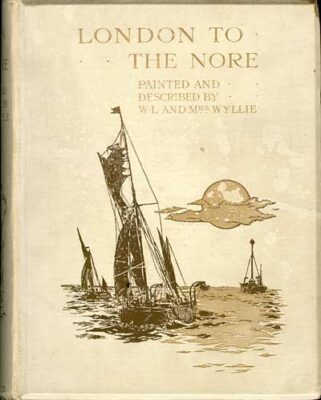 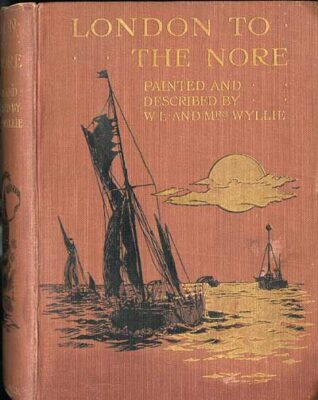 Title: London To The Nore. Painted and Described by W.L.and Mrs Wyllie. 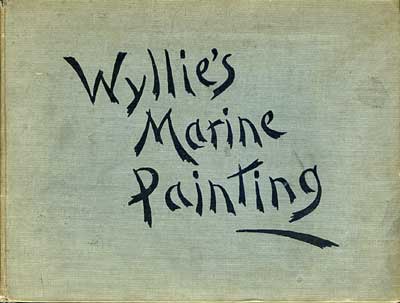 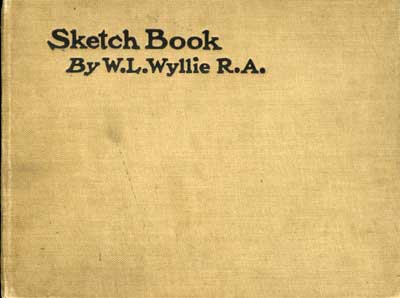 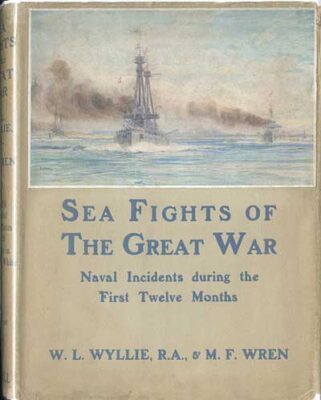 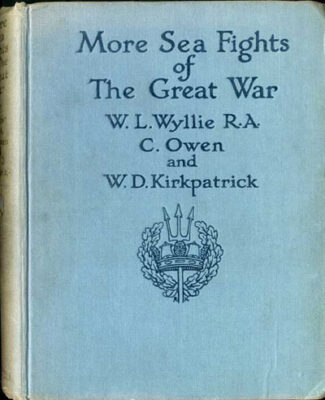 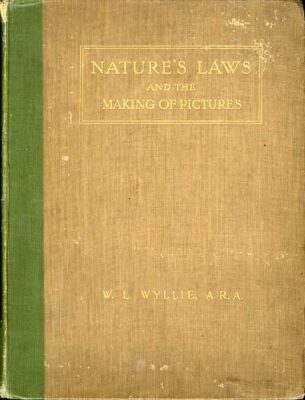 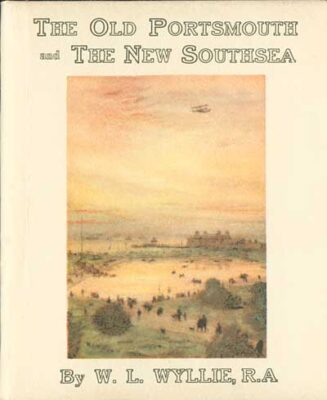 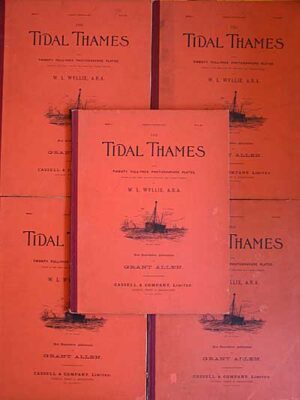 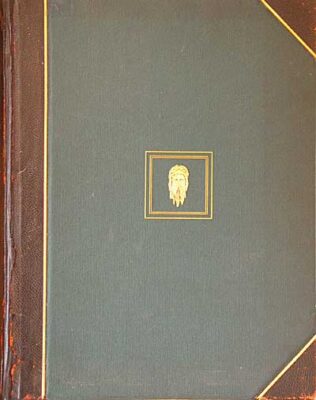 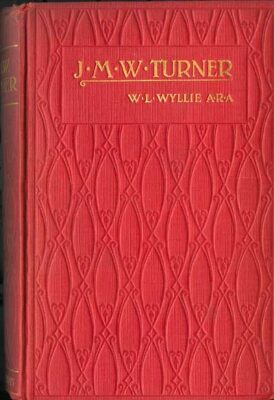 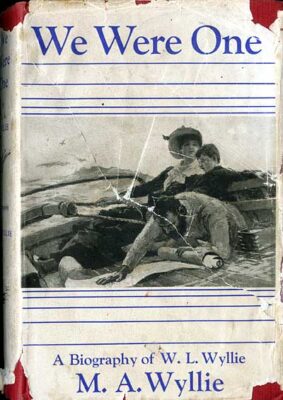 Title: We Were One. A Biography of W.L.Wyllie. 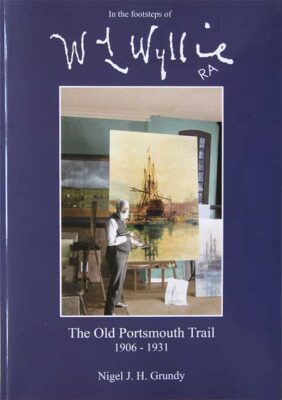 In the Footsteps of W.L.Wyllie RA. The Old Portsmouth Trail 1906-1931 by Nigel Grundy 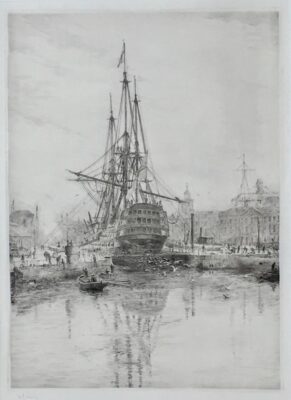 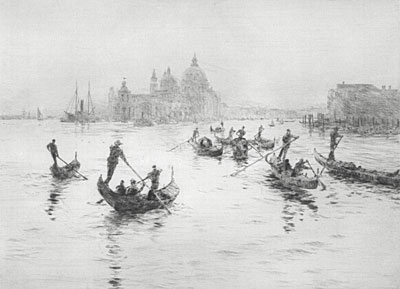 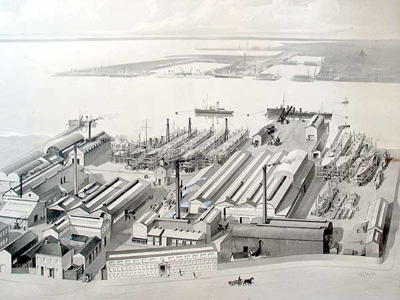 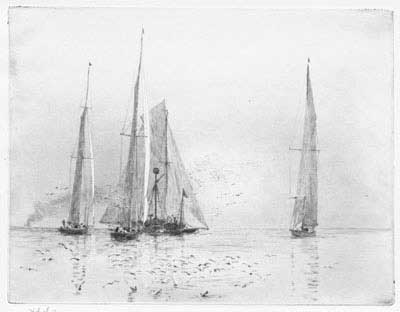 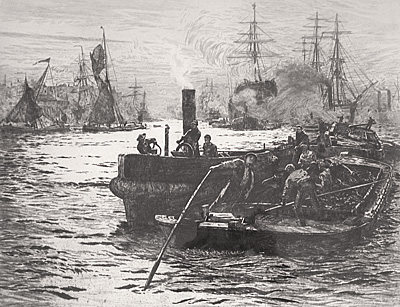 Title: Toil, glitter, grime and wealth on a flowing tide. 1885. The original oil is in the Tate Gallery London.
Medium: Original signed etching 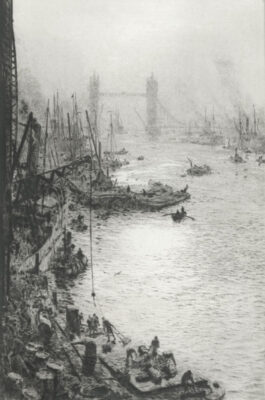