Deryck Foster was born in Bournemouth in 1924 and learned to sail around Christchurch in Dorset. In the second World War he served in the RAF in Lancaster bombers. He painted all periods of marine vessels which reflects his own seafaring experiences of off-shore racing, cruising, dinghy racing and training ships. He was also a member of the RNLI lifeboat crew in Yarmouth, Isle of Wight.

He became a member of the Royal Society of Marine Artists in 1964. Commissioned by Ted Heath to paint a painting of Morning Cloud and one of Bloodhound owned by the Queen and Duke of Edinburgh.

In 1978 Deryck Foster and his wife moved to Bermuda to produce painting to record the Island’s history. Eight years later they moved to Majorca where he painted historical pictures for American collectors.

In 1998 he moved to Rutland where with the aid of his knowledge and historic plans and drawings from Greenwich Maritime Museum (National Maritime Museum) he constructed accurate scale models of ships.

His own gallery in Yarmouth 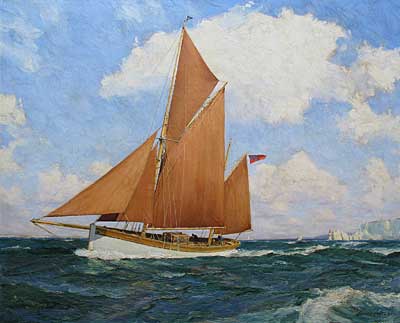