Barry Peckham is proving to be a worthy successor to a notable line of New forest painters. He seems to have taken the strengths of these artists and used them to build his own style and character. Characteristics such as confident brushstrokes, hazy backgrounds and powerful sky’s combined with his understanding of horse movement and their anatomy can all be seen in Peckham’s work. His love of the forest with its vegetation and traditions liken him to the forest artists before him.

Amongst these artists are John Emms (1841-1912) an animal and sporting artist who painted riding, hunting and dog scenes. Arthur Batt (1846-1911) a Brockenhurst artist who started painting forest and rural views and then moved on to animal studies especially donkeys.

Similar to Peckham, Frederick Golden Short (1863-1936) a keen painter of woodland, open forest and occasional coastline scenes, traveled extensively across the forest to capture his scenes. Lucy Kemp-Welch (1869-1958) a talented horse painter preferred the natural horse to the thoroughbred which is also notable in Peckham’s landscape scenes.

Barry Peckham frequently visits the gallery, having been out to capture the sunrise in the forest or off to see the evening sun setting over the Solent. Sketching from life, Peckham’s extensive pallet is well suited to the Forest, Solent shoreline and estuaries.

Many equestrian painters paint more portrait style pictures but Barry Peckham’s are complete pictures with subject, background and foreground which are all given equal care and attention.

Peckham’s marine paintings which include ‘HMS Warrior entering Portsmouth Harbour’ and ‘The Royal Yacht Britannia and Valsheda at Cowes week’ show a great understanding of the wind, sea and sky making him worthy of his exhibits at the Royal Society of Marine Artists.

BarryPeckham seems to be constantly evolving, experimenting and refining his technique. An example of this is his revival of the technique of painting on linen used by the Glasgow Boys’ in Scotland in the 1890’s. Watercolour is worked into the weave which adds to the texture of the picture.

The majority of his work is associated with the New Forest and Solent shores but he seems equally at home, on his painting trips, with the big skies of Norfolk, the quay at St.Ives, Cornwall and the Yorkshire Dales to name a few.

Terence Cuneo presented Peckham with the ëCuneo medal’ for equestrian painting, a true accolade from one of the 20th Century’s leading oil painters. His C.V illustrates he is doing all the right things to be remembered in the future and he is already noted in many reference books including Who’s Who in Art’.

We have sold his paintings to collectors in most continents, some buying on the quality of work alone others wanting to take a part of the New Forest with them.

He is a full member of the Royal Institute of Oil Painters (R.O.I.), Royal Society of Marine Artists (R.S.M.A.) and a Member of the Society of Equestrian Artists (S.E.A.) 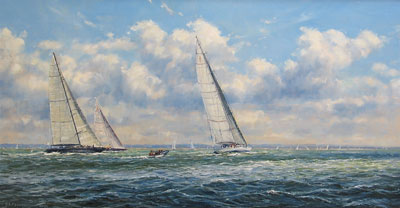 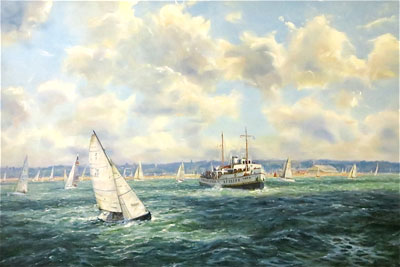 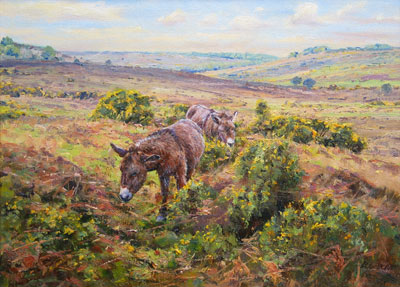 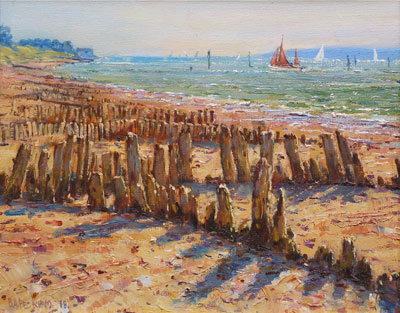 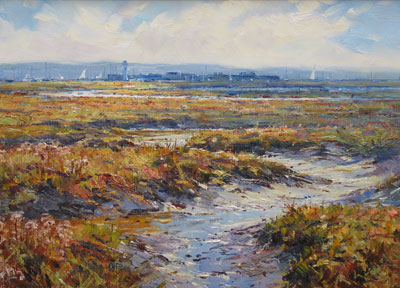 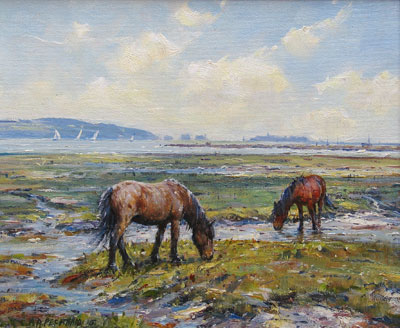 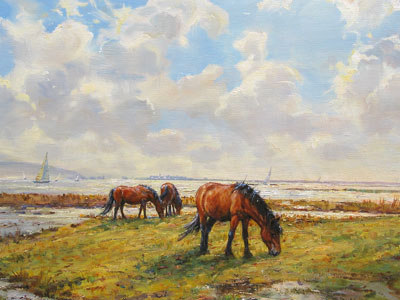