John Emms was born in 1844 in Norfolk. He was a sporting and dog artist based in London from 1880.

When he lived in London he assisted Frederic Leighton, when he visited Lyndhurst in 1864, to paint a fresco in Lyndhurst Church.

He also painted a fresco in Sopley Church in 1871 and he moved to Lyndhurst to live 1872.

From this point, with his connection with the New Forest Fox Hounds, he was comission to paint numerous dog and horse portraits.

In 1902 he suffered a bleed on the brain which resulted in paralyses and pain. He was then able to only paint small dog portraits .

Many of his paintings were handed over to the Stag Hotel in Lyndhurst and local shopkeepers to pay his food and bar bills! In recent times some of these pictures have resurfaced from relatives of these local businesses.

Royal Academy of Arts in London

Royal Institute of Painters in Watercolours 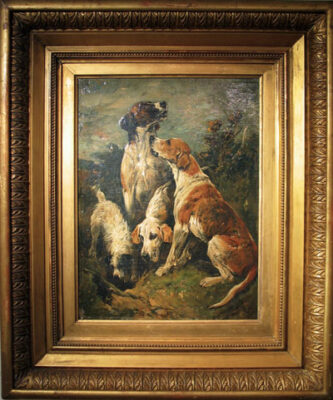